By our reviews and posts, you will get to know us

So, in my real life, I'm a trial lawyer. I prosecute people who rape children and commit murder, and engage that sort of anti-social criminal behavior. Because of that, I'm pretty familiar (actually, extremely familiar) with the rules of evidence.

This post is for the purpose of talking about the rule against hearsay. I don't want to get all boring and legalish and stuff, but basically, the rule of hearsay provides that stuff that is said outside of court (i.e., to a witness who wants to repeat it in court) is sufficiently unreliable that it won't be allowed in court in front of the finder of fact (i.e., jury) unless it fits into an exception that gives it something that we call indicia of reliability. For our purposes, I'm just going to talk about regular old hearsay.

So, hearsay is what happens when some disgruntled author calls someone a troll on an outside website without having any actual evidence to back up that statement. And then, asking other people who haven't seen the evidence and who really don't know anything about what has actually transpired, to rely on their opinion that the person is a troll. Or a bully. Or whatever. That's relying on hearsay to make decisions about someone. It's certainly permissible (after all, life is not a courtroom, and the rules of evidence don't apply in the universe).

So, think about that game of telephone - there is no chance that the secret will be delivered accurately if you whisper it through a chain of ten people even if all ten people are doing their best to communicate the message accurately. Now, imagine if person number 5 in the message chain has an interest in disrupting the communication between the originator of the message and the ultimate recipient of the message.

I'm not going to go into all of the ways that the fleeing Goodreaders have been unfairly maligned because that's silly and it's just me defending myself, and others, against a witch hunt. And I will not dignify those charges with a response because they are spurious.

All that I - and my fellow readers and reviewers - are asking for on this site is a chance for you to get to know us. Read our reviews. Read our posts. Comment on our reviews. Engage us in a dialogue.

You see, we are a ridiculously social group of people. For many of us (well, for me at least), the internet is where we find people to talk books with us. I am an unapologetic book geek, on pace to read 150 books this year. I am a classics reader, and participate in a classics challenge at my blog. I read Middle Grade and YA for fun, and because I have an over two year long reading streak going with my 13-year-old son. I am passionate about books.

I am passionate about authors, too. I am an evangelist for Edith Wharton, and Maggie Stiefvater, and the Harry Potter series, and Willa Cather. I adore Cinda Williams Chima Seven Realms series, and will tell anyone I can to give it a go if they liked Harry Potter. I love doorstopper genre fantasy novels like the ones that Robin Hobb writes. I wish I could live in Middle Earth, or Narnia (but only if my family could come with me). I read genre fiction, I read literary fiction, I read classic literature. I read authors who are dead, and authors who have retired from writing, and authors who don't write nearly fast enough to keep me happy - although I acknowledge that there is probably no pace at which they could keep me happy.

I read indie authors and traditionally published authors. I ask nothing of authors except that they treat people who review their books with respect, and that they don't insult their readers. Edit your books, damn it. And people who upload 300 pages of unedited crap to amazon.com - if I buy your book, and read your book, and find it to be 300 pages of unedited crap, I will give you no quarter in my review of your book.

Don't tell me how I should've felt about a book, and we will get along fine. I won't tell you how you should've felt either, even though I may passionately disagree with you.

If, in the end, you decide that I am just a troll, looking to ruin the lives of people who have themselves done me no harm, or if you only want to read reviews that are sunshine and rainbows, even of the most terrible books, then go ahead. Block me. My posts  will not be helpful to you. I am absolutely fine with this because I know, in my heart, that if you look at what I write and what I say, that you'll find my reviews and my posts to be honest, heartfelt, and full of my thoughts and my opinions. And hopefully they will help you to pick books that you want to read, too, or they will resonate with you and make you want to comment and talk to me about some part of what I wrote.

So when I see this: 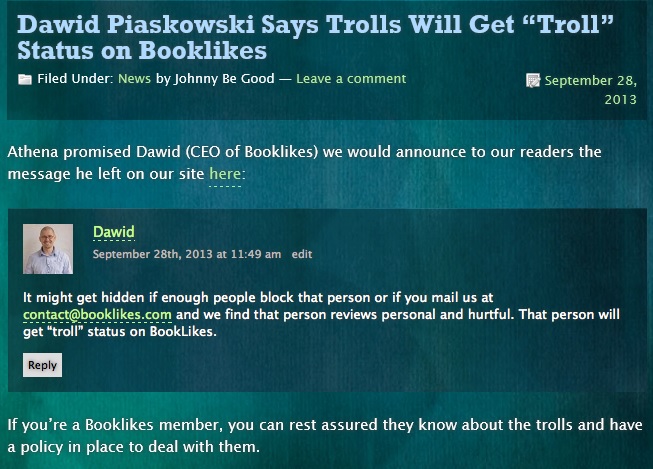 It doesn't scare me at all. Not even a little. Because I'm not a troll and I'm not a bully (let's not even talk about all of the ways that poor word has been abused recently). And people who call me, and my friends, trolls & bullies, will be saying nothing about who I am, and who we are, but a lot about who they are.

Have a lovely weekend!