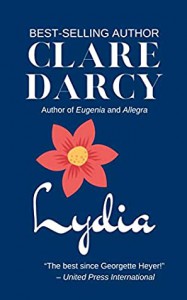 I first read Clare Darcy when I was probably 14 years old - I snagged it off my mother's bookshelf, along with Georgette Heyer. She had an omnibus edition that included Cecily, Georgiana and Cecily. I basically read it into tatters.

When authors like Heyer and Victoria Holt and Phyllis Whitney started showing up on kindle with huge backlists, I remembered the omnibus and wondered if any of the books in it had been reprinted. After a fair amount of bookish detective work, I figured out that it had to have been Clare Darcy. When I started checking for her backlist, in probably 2014 or so, there was nothing there.

Nonetheless, I persevered, and every year or so I would search the amazon store to see if they had shown up. And this morning, when I looked again, there they were, all available through the KU library. I downloaded Lydia and settled in.

This is a quick read - I probably tore through it in 90 minutes or so. The word that most readily leaps to mind to describe it is "adorable." It is light-hearted and sweet and funny. Lydia is a hoot, the true heir to Heyer's Grand Sophy. Darcy isn't as good as Heyer, but she is good.

I just don't know which one to read next.