For readers of the trad regency, kindle unlimited presents...

So, back when I was a teen, I would raid my parent's bookshelves. This was a long time ago - many of you will remember this time - when "YA literature" was barely a thing and once a bookish girl finished reading Nancy Drew and Trixie Belden, it was pretty much time to move into the "adult" section.

Or, as I like to call it, my reading youth.

Anyway, one of the books that I read to tatters was an omnibus by a writer named Clare Darcy, which contained three of her novels. I remember that one of them was definitely titled Lydia, and I believe that the other two were Cecily and Georgiana. 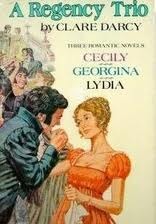 This was my gateway to Jane Austen. My go-to along with Georgette Heyer. And every once in a while, I would check in on Amazon to see if anyone had reprinted Darcy's books for the kindle. One of those check-ins happened this morning.

And I found this:

This is just a sampling - it looks like the entire backlist has been reprinted, and they are all available in the KU library. My mom pays for us to have a membership, so I'm pretty sure I know what I'm doing this weekend - revisiting the London regency trio to see how they hold up!