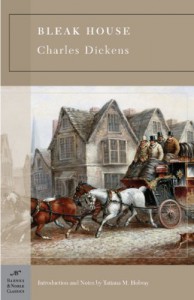 Whew - I have finished this 813 page book after a couple of false starts.

It's classic Dickens. I've heard it called his masterpiece, but I don't have enough experience with Dickens to weigh in on that subject. I did like it a whole lot better than Dombey and Son, but I didn't like it so well as either Great Expectations or Oliver Twist.

The last 20% was a bit of a bloodbath, though, with a murder, an attempted frame-up, and then one of those Victorian deaths where a character just up and dies of despair. I think my favorite character was poor Caddy Jellyby Turveydrop, although I liked all of the women in this one (Ada was kind of meh, but only because she had a whiff of Dora about her). Mrs. Jellyby is a hoot and I can certainly understand why she has become the stuff of Dickensian legend.

Anyway, Dickens is always just Dickens. His books are teeming with life, like when you're in 5th grade science class and the teacher puts a drop of pond water under a microscope so all of the kids can see all of the little amoebas and bacterium and other bits of life wriggling about. I know that he is melodramatic and that his characters more often resemble caricatures, but once I fall into a Dickens, I feel like I'm in Victorian, England, which is a place I dearly love to visit in the literary sense (don't get me wrong, I have no illusions about how awful and smelly it would've been to actually live in it).

I have to share the second paragraph in the book, because it is so fabulously Dickensian and atmospheric:

Fog everywhere. Fog up the river where it flows among green aits and meadows, fog down the river where it rolls defiled among the tiers of shipping, and the waterside pollutions of a great (and dirty) city. Fog on the Essex marshes, fog on the Kentish heights. Fog creeping into the cabooses of collier-brigs; fog lying out on the yards and hovering in the rigging of great ships; fog drooping on the gunwales of barges and small boats. Fog in the eyes and throats of ancient Greenwich pensioners, wheezing by the firesides of their wards; fog in the stem and bowl of the afternoon pipe of the wrathful skipper, down in his close cabin; fog cruelly pinching the toes and fingers of his shivering little 'prentice boy on deck. Chance people on the bridges peeping over the parapets into a nether sky of fog, with fog all round them, as if they were up in a balloon, and hanging in the misty clouds.