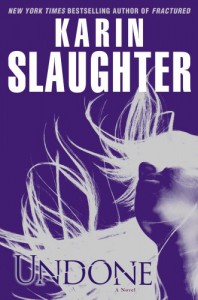 I started this as an audiobook, but couldn't sustain listening to it - it was too graphically violent. When I read a violent book, I'm able to skip over the really detailed violence. With an audiobook, I can't do that. I have decided that Karin Slaughter's audiobooks aren't for me for that reason.

I got to about the midpoint, and wanted to know how it ended, so I checked it out of the library.

I really like the Will Trent series, but I also just wish that Slaughter would dial back the graphic descriptions about five notches. I love the interactions between Faith & Will, and this is the book that brings her two series together - Grant County's Sara Linton is now working in Atlanta and meets Faith & Will at the beginning of the book.

As is always the case, Slaughter's plot was well-crafted and highly readable. The murderer wasn't entirely convincing, and the resolution was really not very believable. She does put together a wild ride, though.

I think that fans of the Lucas Davenport books might enjoy Slaughter's mysteries. They are similar in execution, but her characters do a lot less tripping over their own dicks. They aren't quite as good as the Bosch series at that sort of noir, hard-boiled police procedural thing, but they are still good reads. If you can make your way past the descriptions of trauma and pain.