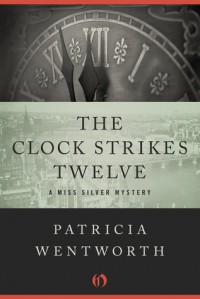 This is the 7th of the Miss Silver mysteries, which I read for the #1944 club on my blog. It is my favorite of the Miss Silver mysteries to date, better even than Latter End, which I also really liked. In fact, this is my sixth Patricia Wentworth - I've read fiveof the Miss Silvers (Grey Mask, Latter End, Poison in the Pen, The Eternity Ring, this one) and one stand-alone (The Dower House Mystery) - and it's my favorite of all of them. Grey Mask is still the weakest, and I wonder how many people have been put off Patricia Wentworth forever by reading that one first. Tragic, really.

For me, this was a near perfect Golden Age mystery. It had the closed circle, and the country house feel. The entire mystery takes place over a couple of days, from New Years Eve, where it all begins, to a few days later, when the mystery is solved and the murderer is revealed. We start with a brief interaction between James Paradine, patriarch of the family, and Elliot Wray, when James summons Elliot to the Paradine house over some stolen aircraft plans. He informs Elliot that one of the family has taken them, he knows who it is, and requires that Elliot remain in the home for the evening so he can put his plan into motion.

The plan is to announce at News Year Eve dinner that he knows that someone in the family has been disloyal, he is not going to expose them at dinner, but he will be in his study until midnight, and the guilty party must come and confess their misdeed to him or suffer the consequences. At the dinner we have all of the members of the Paradine family: Aunt Grace, the spinster sister, Phyllida, Grace's adopted daughter and Elliot's estranged wife, Elliot, Frank & Irene Ambrose (son of James's first wife & his spouse), Mark Paradine, the heir, Richard, a cousin, Lydia, Irene's sister and Andrew, the odd man out, who is a shirt-tail relative of some sort and is also James's secretary. The characterizations were really well-done. James himself is a bit of a Simeon Lee /Penhallow type patriarch, but he was much nicer than either of them.

As a sometime romance reader, I've become convinced that Wentworth actually walks that line between romance and mystery better than any of the other golden age women - better, even, than Christie. She creates convincing romantic subplots that work with the mystery but don't subvert it. Heyer loses the mystery for the romance and Christie loses the romance for the mystery, but Wentworth balances them almost perfectly. The only issue with this is that it does make her mysteries a bit easier to solve, because the primary romantic coupling is pretty well removed from suspicion - part of the solution always involves moving the obstacle out of the way for their happiness.

I've definitely concluded at this point that it isn't necessary to read Miss Silver in order, and I would advocate for skipping Grey Mask altogether. I'm just pleased as punch that, since I've read about 90% of Christie's full length mysteries, and all of Sayers, that I have at least 50 more Wentworths before I've read them all.