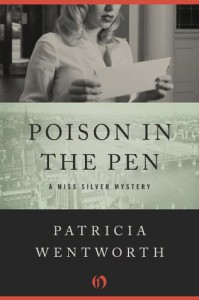 Poison in the Pen is mentioned by Martin Edwards in The Story of Classic Crime in 100 Books in Chapter 6, Serpents in Eden, as an example of the mystery taking place in a rural setting

The English village is one of the most noteworthy settings for a classic mystery - it's depths have been plumbed by pretty much every mystery author, from Wilkie Collins (in the Moonstone) to Louise Penny, whose Three Pines mysteries are nominally set in Canada, but share all of the characteristics of the quirky, rural English village, often look into precisely this phenomenon. The combination of the rural setting and the closed circle leaves lots of scope for psychological analysis, and the juxtaposition of rural peace and murderous violence makes for interesting interactions between characters and investigators.

Poison in the Pen centers around a series of "poison pen" letters that are being received by various villagers on the eve of the wedding of the niece of the local gentry, which result in the suicide of a young woman who drowns herself in the manor-house pond (or is it a suicide? dun dun dun). As is always the case, there is much more simmering beneath the surface of the bucolic village than meets the eye: resentment, infidelity, insanity, and utterly banal evil. Wentworth uses many of the stock character types that are seen in this type of mystery. Miss Silver herself is a Jane Marple analogue, easily underestimated.

I liked this one much better than Grey Mask, which I previously read, and which felt much more cartoonish than this one - apparently middle aged British ladies should NOT write international criminal mastermind mysteries because they are invariably silly. It shares similarities to Christie's The Moving Finger, which also relies on the poison pen letter trope. The relationship between Miss Silver and Frank Abbot of Scotland Yard is intriguing. I enjoyed it, but Wentworth still isn't up to Christie's standard. Which is why she is the Queen.