Murder in the Museum by John Rowland 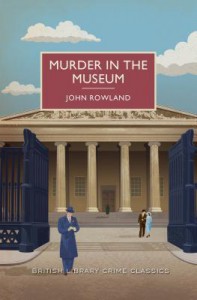 A professor of Elizabethan literature dies in the reading room at the British Museum.

The second book in my mini-exploration of classic crime fiction set in London, I'm pleased to report that I enjoyed this one significantly more than Murder in Piccadilly. While the cover isn't as aesthetically pleasing, everything else was better!

This was a fast-paced mystery, sprinkled with red herrings directing attention to various characters. The good Inspector, Inspector Shelley, is helped along in the investigation by the mild-manner Mr. Fairhurst, who witnessed the death of Professor Arnell, and who ends up acting as a bit of a fairy god(father) to Arnell's daughter, Violet who is engaged to the prime suspect in her father's murder.