Brilliant? Awful? I can't quite figure it out. 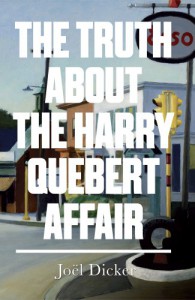 I finished this book yesterday morning. You see, I'd gotten to about 80% the night before, and was engaged enough to get up early so I could finish before work.

I am left conflicted.

The first 50% of this book truly sucked. The writing was stilted, and the characterizations were, frankly, bizarre and unconvincing. The narrator was a crashing bore of pretentious douchebaggery, almost entirely disconnected from his fellow human beings. The premise is ridiculous - no police officer anywhere in the U.S. lets some random writer hang about during a murder investigation.

And then, at the 50% mark, something started to change for me. Yeah, the writing was still stilted, although I became accustomed to it so it bothered me less. The characterizations were still bizarre and unconvincing, but I just don't know. It drew me in. And the various sleight of hand manoevres, the twists and turns and bumpy road of the plot, maybe I'm just a sucker for a surprise, but I liked them.

But, it kept me turning pages, and I've been trying to figure out if it was brilliant or awful since I closed it. So, yeah, I still don't know if I liked the damned thing. But I finished it.

For a couple of additional alternative views on the book, check out Sister Mary Murderous's 1/2 star review here, and Liz Loves Books 5 star review here. This is a book that incites emotion, at the very least.

This book was set in New Hampshire, so fulfills that state in my USA by the Book challenge.