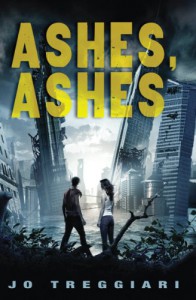 This review was originally posted on amazon on January 20, 2012:

Dystopian is where it is at with Young Adult fiction these days, and this book attempts, without much success, to jump on that bandwagon.

This book is deeply, deeply flawed. That's actually too nice. It is really bad. Let me count the ways.

First off, I do not have any problem willingly suspending disbelief when it comes to fiction. However, if I am going to suspend my disbelief, then the author has an obligation not to insult my intelligence. This book insults my intelligence. There is a massive, monumental, devastating climate change that goes literally unexplained for all three-hundred-odd pages. Weather patterns have changed. In a mere five years, summer has stopped being summer and has become "The Big Wet." Things are submerged. Parts of the U.S. have apparently simply disappeared into the ocean.

Yet, all of this climactic activity has, apparently, no explanation at all. I guess that the polar ice caps have melted. Unfortunately, this is an event that takes half a millenium (or at least a couple of decades) to impact the climate. And we are to believe that all of this happened in less than five years? For this reader, at least, by page 70, I was done (the final straw came at the point that the author had Mt. St. Helen's erupting and burying my hometown of Portland, Oregon, in ash and molten rock. Portland is 70 miles from Mt. St. Helen's, it has erupted in my lifetime, and there was no burying of Portland in ash & molten rock. Part of writing a book is researching it, and part of researching would involve looking at a map, or reading about the actual eruption that occurred in 1980.) There is no reason that melting polar ice caps would cause volcanic eruptions. No scientific reason at all.

This, however, is a small thing when the real problem is the ridiculous story of the virus that ate humanity, which is apparently a version of smallpox. And yet, the author kills off the precise population that would have been immune to smallpox from their childhood vaccinations and has the teenagers survive. It is fine for an author to take some creative license. But when an author uses an actual disease for which people were actually vaccinated 50 years ago, but aren't today, having some of the teens live and pretty much all of the middle-aged ones die is ridiculous. Just wanting to write about remarkably attractive teens living in a devastated world with no parents is no excuse for sloppy plotting. Since I don't want to post spoilers, I'm not even going to get started on the enormous, gaping, quantum-mechanic-esque black hole that is at the center of the whole conflict/villain aspect of the book.

In the end, I'm giving this book one & a half-stars only because it has obviously been professionally edited, which at this point in history is something that a reader can't take for granted. However, in all other respects, it was an altogether unpleasant stew. I am left wondering what Scholastic was thinking in publishing this one, when there are so many others out there that are better.