One of this year's Christmas mysteries 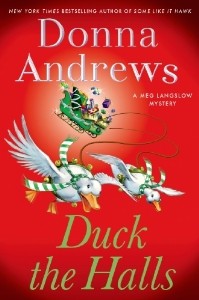 I had a little bit of a hard time rating this book because I liked it, but I also think that it is one of those series that will grow on me since it seems to be so character driven.

I usually don't like jumping into series in the middle, but these books are pretty expensive for kindle, and, while my library has most of them, the first one has entered some sort of parallel universe where it is apparently infinitely unavailable. It's Schrodinger's book, but it pretty much only does not exist. I decided to just say screw it, and start with book #16, which may not have been ideal.

I get the sense that the crime involved is really secondary to the characters, and I don't know the characters yet. I was trying to explain it to my husband, and came up with "The Northern Exposure of murder mystery series" but set in Virginia, not Alaska. Lots of eccentric, quirky characters who do eccentric and quirky things. I spent the entire book trying to figure out what Meg Langslow does, and I'm still not sure. Something churchy, but not a pastor or rector or anything? She has an office in a church - I figured out that much.

Anyway, I feel like I need to read more. I liked the characters I met, even if there was a lot happening that was confusing to me. I can't get Murder with Peacocks, apparently, but I can get Murder with Puffins, which is book 2.

MBD, what do you think? I already have two other Meg Langslow Christmas mysteries: Six Geese A-Slayin' and Lark, The Herald Angels Sing, checked out. Should I return them, and start at the beginning, or should I just go on as I have begun with the scattered approach and expect that everything will start to make more sense about five books in?