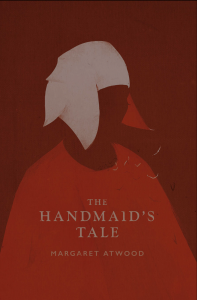 This was a reread - I first read this book around the time of publication, maybe 1987 or 1988. My daughter read it in high school, so I had it in my kindle library, and decided that I did need to revisit it before The Testaments is released later this month.

This is not a book to love because it is such a difficult and terrible read. Atwood constructs the book as a retrospective, the historical notes at the back tell us that Offred's story is discovered at the bottom of an old trunk, recorded onto cassette tapes like the tapes that held the mix tapes I made for, and received from, friends in 1988.

I was in college when Atwood published The Handmaid's Tale. It seemed impossible to me then. More impossible than it does now.

I find myself hating Gilead like it's a real place, and the Commander, and Serena Joy. and the Aunts. Like all of the Serena Joys who really existed - Phyllis Schlafly and her ilk, and the Commanders, who are real, too, who impose rules on others that they have no intention of following.

This is why I didn't want to reread The Handmaid's Tale. It hits too close to home, cuts too close to the bone. It speaks of a world that wants to exist - that already exists in the minds of plenty of men, and even a few delusional and traitorous women, who want to subvert law and justice to make it so - and that scares the living shit out of me. I haven't watched one minute of the television show, because the thought of it makes my stomach roil.

I am half-afraid to read the sequel. We leave Offred - June - stepping into a van and the end the book knowing only that she must have survived to create the tapes, and that, some 200-odd years later, Gilead no longer exists. It's been swept away.