Arrows of the Queen (Heralds of Valdemar #1) 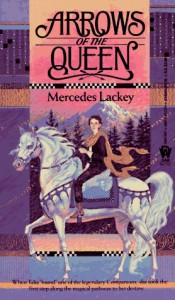 Thanks to everyone who commented on my series post yesterday - as you can see, I settled on the Valdemar series for a couple of reasons. I have a horse and fantasy loving daughter who is 22, and this series seemed like it might appeal to her, and the plot summary really reminded me of the Alanna series by Tamora Pierce, which is a favorite of mine.

Once I selected the series, I had to decide on the order. I didn't spend much time on this, although there are two possibilities: publication order and chronological order. I settled on publication order because the Heralds of Valdemar series is so beloved and seems like a good entry into the world.

Arrows of the Queen is a very fast read. There were some things that I really liked about it - Lackey doesn't waste any time getting right into the main plot, which occurs when Companion Rolan Chooses Talia (all caps are on purpose) and sweeps her away from her abusive, polygamous, male-dominated and primitive community to become the Queen's Own Herald. This did remind me quite strongly of the first book of the Alanna quartet.

I also liked Lackey's breezy, authentic writing style. Talia's self-esteem and trust issues are well-founded and make sense. Lackey refers openly to menstruation, contraception and same-sex relationships (this again reminds me of Pierce's Tortall books) which is refreshing, especially in a book of this age. The Companions are really sort of weird, but telepathic, uncorruptible blue-eyed magical horses is so obviously intended to appeal to teen girls that I'm willing to overlook the weirdness.

There is a lot of sweetness and domesticity here, mixed in with the palace intrigue. There are flaws, too, of course - Talia is a bit too good to be true, and her ability to "cure" the princess heir of her tendency towards brattiness occurs with an ease that defies reality. That entire plot element, from the perspective of a parent, is wholly unrealistic. I don't know if Lackey had children, but a parent who is insightful enough to recognize that their child is an insufferable brat (as the Queen is, here) typically doesn't have a child who is an insufferable brat. I'm also not a fan of hitting children, not inconsequentially because it is generally not a particularly effective form of discipline, so the entire interaction in which Talia cures Elspeth of being horrible in a few weeks by swatting her bottom when she hits her servants (among other things) feels really inauthentic to me - like the sort of plotting that a teen writer would come up with to deal with an issue about which they know very little.

But, this is a book for teens, especially teen girls, and viewing it through that prism, the flaws are easily overlooked, the Collegium sounds lovely, and being Chosen as special by a magical horse would be pretty much the greatest thing ever, and it's no worse a system of government than many seen in fantasy, and better than some.  (Here I am reminded of Monty Python.  "Listen -- strange women lying in ponds distributing swords is no basis for a system of government. Supreme executive power derives from a mandate from the masses, not from some farcical aquatic ceremony.")

I would have read the hell out of this book as an eleven year old, and I thoroughly enjoyed it at 52.