Our Man In Havana by Graham Greene 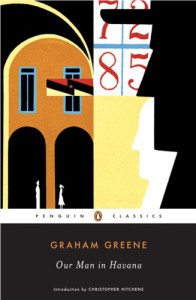 Graham Greene is one of those authors that I've always meant to read - and following along with BrokenTune's Greene-land Adventures project increased my desire to dip into his books. The Summer of Spies gave me a perfect opportunity to check out one of his "espionage" books.

I wasn't expecting the level of farce contained in this book. It's not really a spy story - it's a story about a reluctant vacuum-salesman-turned-spy who has no intelligence to provide, but who needs to make the money he is getting for his dispatches worth the while of the British Intelligence service. So, he starts making stuff up.

There are some very funny parts of this book - the "missile drawings" that were obviously based on a vacuum cleaner is hysterical. The conversation between Hawthorne and his boss where the boss convinces himself that Wormold is actually some sort of a merchant king is bitingly funny, and also quite a propos of current politics, where, apparently, 49% of America can be convinced that a lying moron with inherited money is actually a brilliant strategist worthy of being President.

When it is in your interest to believe something, this book points out, reality is of little import.

And, as it is in life, when delusion collides with truth, someone is probably going to die. The ending is a brilliant illustration of what happens when human beings are confronted with an inconvenient and embarrassing reality - sometimes maintaining the lie is easier than acknowledging that you've been fooled.