A Knife to Cut Windows Between the Worlds 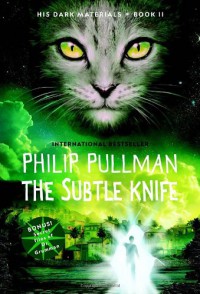 This is the second book of Pullman's trilogy. You can find my post about the first book, The Golden Compass, here.

This second book picks up the action where the last left us - with Lyra having crossed the bridge into a different world, when that bridge was created with the energy release that occurred in the moment that Lord Asriel severed Roger's soul from his body. With a terrible murder, something new is forged. In addition, Pullman brings in characters from a different world in the multiverse - our world. Will Parry, son of a lost Arctic explorer, is being pursued by a shadowy group who are looking for some letters between his father and his mentally ill mother.

Much of the action of this second book takes place in a dying world called Cittagazze, where creatures called Specters eat the souls of the adults, turning them into lifeless shells. The Specters do not bother the children, only becoming interested in them when they reach puberty - or full-consciousness, in Pullman's formulation. We know from the first book that Dust settles on adults after their daemons take final form, or at the same time that their sexual awakening occurs. It is this Dust to which the Specters are attracted.

In The Subtle Knife, Will takes possession of the second important artifact in the books, a knife which is capable of cutting windows into other worlds of the multiverse. Only certain individuals can wield the knife, and Will wins the knife in a battle, injuring himself. He and Lyra work together to try to unravel the mystery of why they are being pursued. They come into contact with a third major character, Mary Malone, a former-nun-turned-physicist, who is working on a computer which can communicate with a sort of particle that she has discovered, which she calls Shadows, and which seems to have some sort of consciousness.

Lyra's secondary family - Iorek, Lee, and Seraphina Pekkala, follow her into this other world, where they work together to save her. This book does, however, introduce angels, two of whom begin working with Will to find Lyra after the two children have been separated at the end of the book. The answers to most of the big questions are reserved for the final book, however.

It's become difficult for me to remember where this book ends and the last book begins, so I'll just stop here and wrap up my thoughts in my final post.